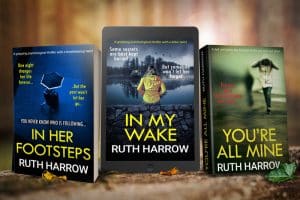 Ruth Harrow was born and raised in London and graduated from the University of Kent before embarking on an unfulfilling career as an accountant.
She eventually put pen to paper and her debut psychological thriller, In Her Footsteps, was published in 2018 and quickly became a bestseller. Following the success of her first novel, her second book, You’re All Mine, was released in 2019. Her third psychological thriller, In My Wake will arrive on 16th July 2020.
She lives in Colchester with her husband, two children and chocolate Labrador, Rolo.
To get exclusive updates about future books please add your email to her official notification list.

Any cookies that may not be particularly necessary for the website to function and is used specifically to collect user personal data via analytics, ads, other embedded contents are termed as non-necessary cookies. It is mandatory to procure user consent prior to running these cookies on your website.